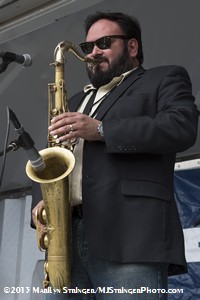 Tenor saxophone, vocals and songwriting are Alex (the Reverend Vegas) Flores’ jobs with Bad News Blues Band, which he co-founded with Mike Blommer. He’s the front man with down-home friendliness and wit, sometimes making sure the audience is at ease and at other times winding them up.

A self-taught musician, he enjoys playing piano, guitar, wind and reed instruments, and got his start listening to jazz greats Charlie Parker, Dexter Gordon and John Coltrane. He also handles the band’s horn arrangements and shares lead vocals. Alex’s falsetto quips in answer to Blommer’s call-and-response guitar are one of the band’s popular traditions, as are his strolls through the audience. His rich voice and style are perfectly matched to blues, whether he’s crooning a West Coast Swing number or belting out a Texas shuffle.

After attending Pima Community College, Flores did a stint with the National Guard and considered going into NASA’s astronaut training program; fortunately for Arizona he chose to be a full-time musician.

Today this native Tucsonan is one of blues’ most popular sax players, and was awarded the TAMMIE for Horn Player of the Year in 2000 and 2002. Alex is considered one of the most influential musicians by and among Arizona’s Hispanic youth.

The horn-driven high-energy band regularly garners front-page newspaper coverage when on tour, and is by most accounts the most popular ambassadors of Arizona blues. In addition to individual players’ awards, the band is frequently voted TAMMIES Working Blues Band of the Year, Blues Band of the Year (including 2003) and Band of the Year. Bad News Blues Band has twice won the Arizona Blues Showdown and represented the state at the International Blues Talent Competition (1997, 2002), and is the first blues band to be placed on the Washington D.C.-based Kennedy Center for the Performing Arts’ International Artist Roster