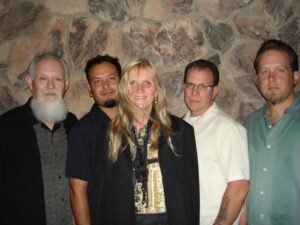 The horn-driven high-energy band regularly garners front-page newspaper coverage when on tour, and is by most accounts the most popular ambassadors of Arizona blues. In addition to individual players’ awards, the band is frequently voted TAMMIES Working Blues Band of the Year, Blues Band of the Year (including 2003) and Band of the Year. Bad News Blues Band has twice won the Arizona Blues Showdown and represented the state at the International Blues Talent Competition (1997, 2002), and is the first blues band to be placed on the Washington D.C.-based Kennedy Center for the Performing Arts’ International Artist Roster.