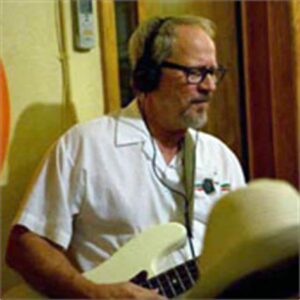 Blake has been playing guitar around the state of Arizona for over 25 years with various blues/jump blues and roots bands, including the Hoodoo Kings, Kings of Pleasure and the Juke Joint All-Stars.  He started playing guitar in 1965 and was soon playing in various country and rock bands in his home town of Casa Grande through 1976.

When he re-located to Phoenix, he worked and became a student of ‘older music’, such as blues, rock-a-billy and 50’s/60’s country.  In 1991 he joined up with a short-lived roots rock band, his first taste of playing with full-time musicians.  Next was an affiliation with the Hoodoo Kings, first sitting in often, and then becoming one of the guitarists they used.

1995 brought a move to Tucson for the day job, where he played with both the Hoodoo Kings and the Kings of Pleasure, plus other blues bands. The Juke Joint All-Stars came along in 2008 as a one night tribute to Wynonnie Harris, but lasted 4 years as a band, including one album release.  At this writing he is currently freelancing and playing frequently with the Kings of Pleasure