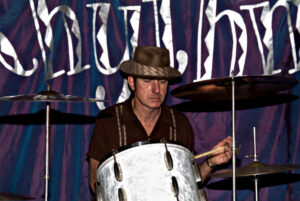 Brian was born in Yonkers, NY and moved to Phoenix in 1985.

He started playing drums in 1980. His first big influence was Gene Krupa, who was a local guy where Brian was growing up.

He played his first gig in 1981 at the Belmont Inn (at the race track).

He was first inspired to play music when he heard “Rock around the clock” by Bill Haley.

He played in New Mexico for awhile with the band, The Sultans. He won a “best drummer” award in NM in 1997.

He lived in San Diego for awhile where he played with the Paladins.

Brian has played with many bands including, The Sultans, The Paladins, The Varmits, The Hoodoo Kings, The Rocket 88’s, The Joint Chiefs and also with the late harmonica legend William Clarke. He played on albums by the Paladins and the Hoodoo Kings