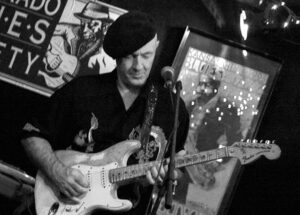 Danny has played in all 50 states, Canada, Japan, and Europe. He has performed on Austin City Limits, the Grand Ole Opry, HBO and the New Orleans Jazz and Heritage Festival.

In the late 70’s, Danny spent two years in Austin, TX and shared bills with Stevie Ray Vaughn and the Neville Brothers.

While living in Nashville, TN, he had the opportunity to perform with Dicky Betts, Gregg Allman, Rodney Crowell, Gatemouth Brown and Dash Crofts, among others. . He was a staff writer for Warner/Chappell (Warner Bros. publishing company). He wrote songs for several artists, including Etta James. His song, “Get Funky,” was the first single from Etta’s Stickin’ to My Guns album on Island Records.

In 1996, Danny moved to Arizona and formed the Messengers. The band won the 1999 Arizona Battle of the Bands and has opened for the Neville Brothers, the Radiators, Tab Benoit, and Sonny Landreth.