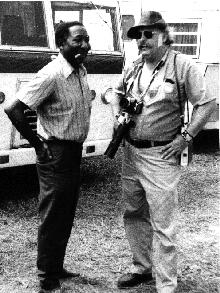 Douglas J. (Doug) Fulton of Tucson, AZ, long-time blues collector and photographer, born April 5, 1928, died December 5, 1996 following a brief illness. Doug’s “day job” for many years was as a news photographer, columnist and outdoor editor for the Ann Arbor (MI) News, where he won numerous awards for both writing and photography. Born in Illinois, he lived in Tennessee and northern California before settling in Tucson in 1939, where his father was a train dispatcher for the Southern Pacific Railroad.\ Doug attended Tucson schools and the U of AZ, where he earned a B.A. degree in languages, graduating magna cum laude, Phi Beta Kappa and Phi Kappa Phi. He attended the U of Chicago for one year, where he first met up with the blues in 1950 before transferring to the U of Michigan, where he earned a M.A. in Linguistics. He served in the USAF during the Korean War with the OSI and Air Intelligence, and returned to Ann Arbor in 1955. Doug covered the famous Ann Arbor Blues Festivals and later the Blues & Jazz Festivals for his newspaper, and also covered all of the well-known blues artists who appeared in Ann Arbor during that great blues revival period. His photos graced the cover and inside pages many books and blues journals, including Blues Who’s Who, and a number of record albums. During his tenure with the paper, he also began a record review column which devoted much space to blues music and began his life-long pursuit of collecting blues records, books and other memorabilia. He took early retirement in 1983 because of health reasons and returned to Tucson, where he became affiliated with the Tucson Blues Society, serving in a variety of positions, including one term as president, editor of the newsletter and founder/editor of the society’s Blues Greats calendar. Each year the calendar featured some of Doug’s classic blues photos. Doug also helped to begin the society’s “Blues in the Schools” program, and he worked tirelessly to collect citations for blues books for a blues bibliography, which he revised periodically and offered to blues lovers, blues societies and anyone interested in the history of the blues. He also used this bibliography to select books to build up a collection of blues information in the Tucson/Pima Library, purchased with part of the proceeds from the sales of the Blues Greats calendar. Other blues societies followed the example of this program. This program also helped TBS to be named Blues Society of the Year by the Blues Foundation in its Keeping the Blues Alive awards for 1994. Doug is survived by his wife, Anna, of Tucson; a son, Bruce (Saundra), also of Tucson; and a daughter, Andrea, Monterey, CA. Doug’s extensive collection of negatives of blues artists are scheduled to be given to the Blues Archive, University of Mississippi, to be made available to blues scholars and other interested persons. Memorial contributions in Doug’s name may be made to the Blues Archive for care and distribution of his blues photos; or to the Nature Conservancy.