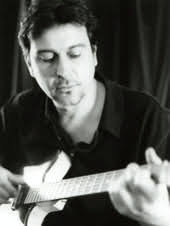 Eddy is a professional musician in Tucson playing guitar in jazz and rhythm & blues genres. Ed played with the internationally known blues artist Sam Taylor since 1991 and toured the European concert and festival circuit from 1995-1997 with the Sam Taylor Blues Band. He has also been privileged to play along side the legendary guitarist Dickie Thompson. Ed has enriched the jazz community in Tucson since 1982 through his ongoing performances at local venues, concerts produced by the Tucson Jazz Society (TJS) and Pete Swan’s Jazz Jam, and by accompanying celebrated artists such as Joe Bourne, Lisa Otey, and Jeff Haskell, as well as visiting artists from New York City and Los Angeles. His blues roots are an integral part of his playing today forming a personal style integrating the blues and modern jazz. Ed plays with his own trio every Friday evening at “Acacia” restaurant at St. Philips Plaza. Ed performs with vocalist John Ronstadt in the “Ronstadt/DeLucia/Black Trio” and with “Round Midnight.” He is Tucson’s most popular choice for solo guitar work. Eddy also works around town with the cities best blues and rock musicians. His trio “The Power of Three” specializes in the music of Jimmy Hendricks. He can be see often playing with Danny Krieger, Steve Grams, Heather Hardy, or “The Bad News Blues Band.” For more than 25 years this Connecticut Born guitarist brings the flare of the East Coast to the Old West.