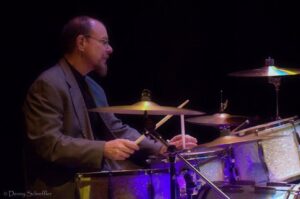 Glenn Velardi has been a working musician in the Tucson area since 1992 having started his career playing the drums for a few local acts including Sam Taylor and as a member of Bobby Taylor and The Real Deal Band.  He was eventually tapped to tour and record with the legendary Percy Strother which he did until Percy’s death.  Glenn next landed the drum chair with the Bad News Blues Band in 1997. he was a part of that band which won the Arizona Blues Showdown and went on to compete in Memphis representing Arizona that year.

Glenn remained with Bad News Blues Band until 1999 when he got a offer to tour with Mighty Sam McClain. 2 years later, he found himself back in Tucson where he was recommended to fill the drum seat with Long John Hunter.

Glenn has been part of the “Blues In The School” program, and has lectured a number of times to students in the Tucson Unified School District system about the history of the blues in an effort to pass the blues on to a new, younger generation.

Glenn continues to be deeply immersed in the local blues scene both teaching drums and playing in and out of Tucson and the surrounding communities.