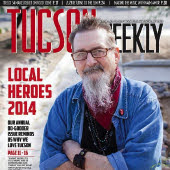 After graduating from high school in Kankakee, Illinois, in 1966, Dave Squires, a.k.a. Kidd Squidd left and went searching for on all kinds of adventures.  He hitchhiked to San Francisco, California, he spent his nights at Fillmore West and the Winterland, catching many of the greats; Jefferson Airplane, Hendrix, Buffalo Springfield, Janis with Big Brother and the Holding Company.  Eventually he moved to Los Angeles in the ‘70s and played music at social events.

Later in the ’70s, he drifted back to Kankakee, where he did DJ gigs at parties, immersed himself in the history of rock ‘n’ roll, reading everything he could get his hands on.

In 1980 he moved to Venice, California, working days at a department store and spending his nights haunting the “small, dingy little clubs where the most essential rock ‘n’ roll was being played — punk, new wave, ska.”

Then in 1983, his brother, who lived in Tucson, sent him a brochure about a new radio station in Tucson. It’s name: KXCI. Dave then moved to Tucson and started working as a DJ at parties and weddings while volunteering at radio station KXCI.  His first appeared on KXCI was on Christmas Eve 1983, just three weeks after he moved here from Venice, Calif.  He started off on KXCI’s “Mystery DJ” program that let members of the public come in and play music on the air.  Paul Barrington, one of KXCI’s co-founders, eventually invited him back for his own show.

Kidd Squidd has been voted Tucson’s Best DJ 16 times by the readers of the Tucson Weekly.  He changed the name of his program from Rockroots with Kidd Squidd to Kidd Squidd’s Mystery Jukebox in the mid 90’s, because his love and awareness of music expanded beyond simply the Roots of Rock’n’Roll/Blues to many more styles, both new and old.