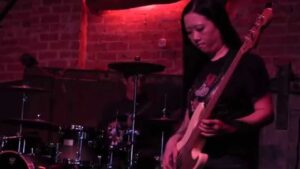 Koko was born and raised in Tokyo, Japan.  Her parents sent her to piano lessons when she was in the third grade just to give her something to do while they worked.  Music became her passion soon after.  She started to take classical guitar lessons while she learned how to play drums and percussions at her school brass band. Koko first came to Tucson in her Junior year of high school as an exchange student, and later decided to come back for college.She started jamming on drums with friends around that time.

One day an experienced drummer came along and she was handed a bass.  The quirky comedic band, Doug Hancock and Mid Life Crisis, often performed in the street corner of The Fifth and Congress during Down Town Saturday Night.  One of her friends took her to see legendary Sam Taylor performing at Jamie’s on Fourth avenue where she encountered BLUES and her future husband, Bryan Dean who was Taylor’s guitarist.

Koko played on with bands such as Kiko Jacome and The ATM band, while she attended Deacon’s blues jam sessions at Berky’s.  Deacon, Dean and Koko became a chameleon unit, as a house band of jam sessions, recording and backing up singers as well as featuring themselves.  They opened for national acts such as Little Feat and John Mayall and the Bluesbreakers.

Soon after graduation, Dean and Koko were married.  They played almost full time at places like Sakura restaurants and Westward Look while developing Bryan’s original blues trio with the drummer, Ralph Gilmore.  In 2010 the trio won Southern Arizona Blues Heritage Foundation Blues Challenge and made it to semi-final at Memphis International Blues Challenge the following year.  They have opened for George Thorogood, Kim Wilson and Coco Montoya among others.  They have two albums,Pink ElephantandSobriety Checkpoint.  At this writing Koko is currently involved with a new project with Heather Hardy calledSoul Session, a tribute to Sam Taylor particularly around a gospel album he recorded.