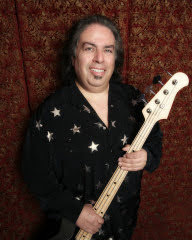 L.A. native Larry Lee Lerma has been a touring and recording member of the Blues Brothers, with Dan Ackroyd and Jim Belushi, for the last 20+ years.

Larry cut his teeth on the vibrant Sunset Strip new music showcase scene, gigging at legendary venues such as the Whisky, the Roxy, Gazzari’s, the Starwood, etc., with several original bands throughout the Eighties and into the early Nineties.

Towards the end of that period, Larry also toured briefly with the great Mick Taylor (Bluesbreakers, Rolling Stones).

In the mid-Nineties, the flagship House of Blues Sunset Strip concert venue opened for business, and Larry was tapped to be the bassist for the house band, the Sacred Hearts.   In that capacity, he has backed notable artists as diverse as:
Bruce Springsteen, Sam Moore, Buddy Guy, Taj Mahal the Hi Records All-Stars, Paul Schaffer, Chakha Khan, Al Anderson, Tom Scott, Chris Thomas King, and others.

It was here that Larry and the band eventually met Jim Belushi, who was one of the original investors.  Jim started sitting in to prepare for a movie role.  Soon the band and Jim had worked up enough material to start playing full length engagements all around the country.

Subsequently, Dan Ackroyd and Jim hit upon the idea of using the Sacred Hearts on Blues Brothers dates.  The guys and the band have now been together for 20+ years, and whenever a new HOB is opened, the band performs with the Blues Brothers as well as backing up notable guest artists.  At one such opening, in Cleveland, Larry and the band had the singular honor of backing the iconic Gatemouth Brown, less than a year before his death.

Larry was also thrilled to be a part of the nationally televised annual PBS show A Capitol 4th, (2017) with the Blues Brothers w/ special guest Sam Moore.

The band, with Dan and Jim ,also promoted a project album, Big Men Big Music, with late night network television appearances on Jay Leno, Carson Daly, and, most significantly, Saturday Night Live.  On the same tour the band also performed live at the Rock and Roll Hall of Fame in Cleveland, Ohio.

Larry’s recording sessions with Jimmie Vaughan during this period yielded tracks on both the Dusk to Dawn movie soundtrack, and Jimmie’s album Out There.  Larry also played for several years, just prior to moving here, with Jimmie’s pianist/guitarist Denny Freeman, the legenday Texas guitarist and charter member of the Cobras (with a young Stevie Ray Vaughan).  Denny also recently did several years as Bob Dylan’s lead guitarist.

This past decade, Larry was asked to participate in creating music for Jim Belushi’s long running ABC televison sitcom  According to Jim.  Jim wanted theme and incidental music with a bluesy feeling and swagger.  Larry composed a number of the “unhinged solo twang bass” interstitial music cues used throughout the show’s run.  He also performed on the show’s theme song, as well as performing on the show on and off camera.

Since taking up residence in Tucson 20+ years ago to raise a family, Larry has been performing and recording with Tucson Hall of Fame blues artists such as Bad News Blues Band, Heather Hardy, Stephan George, Danny Krieger, Ed DeLucia, Tony Uribe, George Howard, the late great Sam Taylor, Mr. Boogie Woogie, etc,   He is also founding member of a band that occasionally visits Tucson from  L.A., fondly remembered by many Tucson blues fans – the Souleros.