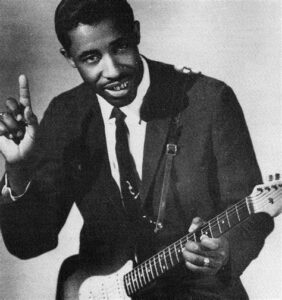 John T. Hunter, Jr. was born in Louisiana in 1931 and grew up in Arkansas and Texas. He had no interest in being a professional musician until, at age 22, co-workers at the Beaumont, Texas box factory where he worked took him to see B.B. King perform at the Raven Club (he wasn’t going to go when he heard about the $1.50 cover charge, so his friends paid his way).

Hunter was amazed at the reception King got from the crowd, especially the frenzy of the women in the audience. The very next day Hunter went out and bought a guitar. Even though he had never played before, he was determined to be like B.B. That very week he put a band together and before long developed his own style, a vibrant mix of swinging blues and razor sharp guitar playing reminiscent of fellow Texans Albert Collins and Gatemouth Brown, with a definite nod towards B.B. King.

Less than a year later, Hunter was headlining at the Raven, the very same place he first saw B.B. He moved to AZ in 2001 and played in the valley on and off since his quintuple bypass surgery in 2004.