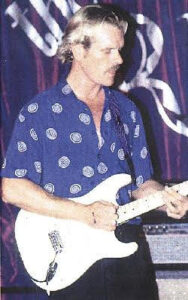 Matthew Roe was born in Tempe, Arizona on January 7, 1963. He started playing guitar and drums in 1973. His first major inspirations came from The Beatles, Jimi Hendrix, Cream, Hans Olson, Jeff beck, The Rolling Stones, Mike Bloomfield and the Midnite Blues Band. Matt’s first performance was in 1979 at Dan T’s in Tempe. His father booked the gig for him! His first band was called The Matthew Roe Band.

He has also performed with nationally known acts including: Otis Rush, Robert Jr. Lockwood, Nappy Brown and Lowell Fulsom. He has also fronts his own band, The Matt Roe Group.

Asked about his other interests, he says “I like to swim!”