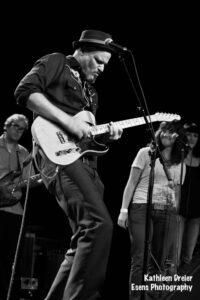 Michael P. Nordberg has been involved in many Tucson blues and R&B bands since the late 80’s. He played bass and toured overseas with Sam Taylor and was a part of Debra Coleman’s tour band before coming to Arizona. He currently works regularly around Southern Arizona fronting his own group, “The Camino Royals,” singing and playing guitar, as well as drums and bass. He’s definitely one of the hardest working musicians around and his band has released recordings as well.