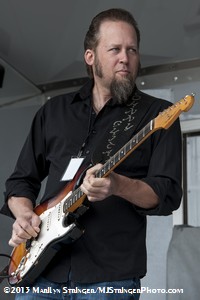 Guitarist/vocalist/songwriter Mike (Johnny Guitar) Blommer shares lead vocals and songwriting in Bad News Blues Band. His dad, Mike Blommer Sr., is a blues and jazz trumpeter who often guests with the band, and whose knowledge about the blues masters was a major influence on Mike’s appetite for blues during childhood. He also cites his parents’ vast record collection, especially those of Charlie Parker and Louis Armstrong, for leading to his preference for multiple horns in his band.

Blommer started playing drums in fourth grade and took up the guitar a few years later. Since then, he’s never looked back from the blues, and encourages every youngster to learn and share something about the genre and to play an instrument.

In performance, he re-popularized show-stopping antics in Arizona such as walking along bar tops during songs and leaving the building to play on the street. Tucsonans are particularly proud of band members’ 1996 midnight arrest for crossing Speedway to play on the meridian while the notes wailed out of amps inside the club.

The horn-driven high-energy band regularly garners front-page newspaper coverage when on tour, and is by most accounts the most popular ambassadors of Arizona blues. In addition to individual players’ awards, the band is frequently voted TAMMIES Working Blues Band of the Year, Blues Band of the Year (including 2003) and Band of the Year. Bad News Blues Band has twice won the Arizona Blues Showdown and represented the state at the International Blues Talent Competition (1997, 2002), and is the first blues band to be placed on the Washington D.C.-based Kennedy Center for the Performing Arts’ International Artist Roster.