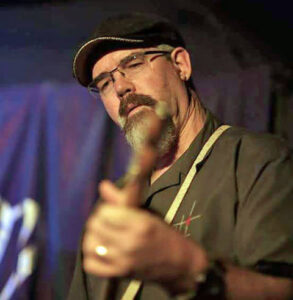 Mike has been participating in the Phoenix Blues scene for nearly the last 20 years.  Once bitten by the blues bug, he quickly moved from the jam circuit to regular gigs with local bands including The Rhythm Method with Dave Andrews, Cold Shot and the Hurricane Horns, Chico Chism’s Chicago Blues Band, Jimmy Peyton’s Midnite Blues, Jump Back Brothers and others.  These associations have afforded Mike the opportunity with some artists of note, such as Carey Bell, Nappy Brown, Joe Houston, Guitar Shorty, Dave Riley, Lazy Lester, Steve Guyger, Johnny Dyer, James Intveld, Mike Arguello, Kim Wilson.  Mikes playing style is derived from the roots of electric blues, having been influenced by the likes of T-Bone Walker, B.B. King, Earl Hooker, Albert Collins, Freddy King, and many others.  His contemporary influences, Duke Robillard, Anson Funderburgh, Kid Ramos, Ronnie Earl, etc., share that basis in the roots of the Blues.

Since 2006, Mike has been proud to take the stage behind Big Pete Pearson Blues Band, regularly playing at the Rhythm Room and for such events as the Gibson (Glendale) Jazz and Blues Festival.  More recently with Sistahs Too, Coolwater Rhythm and Blues Revue, yearly with Hans Olson Band.  Mike especially appreciates all the wonderful local musicians who have all been so influential and supportive over the years, and wife Aleida, #1 fan, booster and confidant for over 20 years.