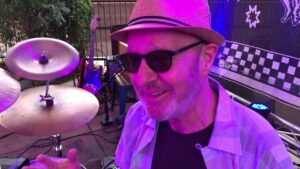 Ralph Gilmore grew up in Southeast Texas hearing everything from his parent’s big band and popular song catalog from the 1940’s, his sibling’s extensive Rock & Roll, Soul & R&B records from the 50’s and 60’s, and the newly emerging blues inspired psychedelic rock music of the day. Country music, New Orleans jazz, and Cajun Zydeco music also were dominant forces in his musical surroundings.

After three semesters in college he joined a traveling disco/funk band that eventually landed in Tucson in 1976. They became “Central Air”, an original jazz-fusion group that settled in Tucson in the late 70’s. Later, some of the members of Central Air, Ralph included, moved to LA. After recording a record and touring with the ‘80s version of The Grassroots for 3 years, he moved to Austin, TX to pursue recording. After a while he returned to Tucson to run the drum department at Rainbow Guitars. Ralph now plays with The Bryan Dean Trio, Grams & Krieger and others.