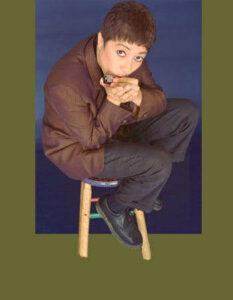 Rochelle is the closest thing to a Phoenix native the Sistahs have; although born in Los Angeles, she has lived in Phoenix all the rest of her life! Rochelle has played harp for over twenty years and was part of the 1990 blues scene with Just Cuz, a band that made it to Memphis’ Blues Competition twice; her enthusiasm and energy is the stuff of local legend!

In her own words:
“I was brought up in downtown Phoenix and was inspired at a young age by the soulful sounds of South Phoenix. In particular, there was an AM radio station, KCAC, that broadcast live shows from the IDClub. Booker T & The MGs were always playing down there and I would listen to them in my bedroom. I automatically leaned more towards R&B, Soul and Motown, anything that had a good groove to it.” “At the age of eight, my mom took me to a James Brown concert; kids under nine got in for 99 cents. I believe the first time I saw James Brown…I just knew…man, there was some sort of magic there, the power of getting everybody off their seats, the power of dancing and just the love he showed…he gave everything, every ounce and I feel when I’m on stage, I want to do the same!”

“At thirteen, being at the very front of the stage at a Sly and The Family Stone concert, the harmonica and I found one another. It was at that time that Sly, playing “Wanna Take You Higher”, threw out his Marine Band key of C harmonica to the front of the stage, where I pulled myself up and grabbed it. For some strange reason, there was a connection between the harmonica and I. Practicing to every record I could get with any kind of harmonica on it helped develop my sound and ear. Not formally knowing how to read music, I only had the sound of the music to go by.”

“My influences along the way, as far as harmonica players, were Paul Butterfield, John Mayall and, in the late 70’s, early 80’s, I really started enjoying and hearing a different sound in Lee Oskar’s playing. Lee Oskar really did help influence me in the sound I try to get. I also use Lee Oskar harmonicas and was honored to get to meet Lee Oskar a couple of times; I can definitely say he is one of my mentors!”