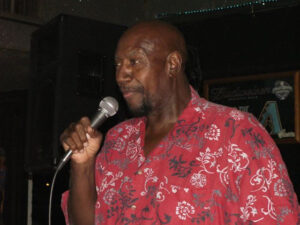 The Chief’s unique voice and heartfelt delivery make him one of the great Blues singers in Phoenix. His powerful delivery invokes memories of Howlin’ Wolf. Born in Eqypt in 1925, the Chief was the first son of a tribal Chief and was raised in the tribal traditions. He moved to America in 1969 and began singing in a place called Momma Leones in New York. After that he moved to Arkansas and ended up getting a job singing with Charlie Rich. He loved singing country music but it was in Dark Hollow, Arkansas where he heard the “Blues” and his destiny was clear. He got a job working as a roadie for Arkansas Larry Davis and Albert King. One night he filled in singing for Albert King , who had laryngitis, and his Blues career was born.

He moved to Tucson in 1981. In 1989 he moved to Phoenix and quickly made friends with local legends, Bob Tate and Dennie Hartnet., who helped him learn about the music business. The Chief has performed at the Monterey Jazz Festival, The Celebrity Theatre and many other venues around the Valley. His most recent recording is “Snakes Crawls At Night” Released in 2004.

Schabuttie Gilliame passed away December 23, 2014 in a West Valley hospital.