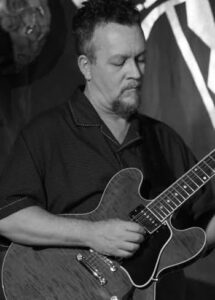 Scotty received his first guitar at 9 years old and was playing gigs by the time he was 19. Throughout the 70’s he played nightclubs, juke joints and honky tonks in North Carolina, Tennessee and along the east coast from Vermont to the Florida Keys.

Scotty moved to Phoenix from Washngton DC in 1980, and by 1983 he was the original guitarist with Valley blues legend Big Pete Pearson’s Blue Sevilles. He went on to work with Arizona blues bands like Texas Red and the Heartbreakers, Small Paul & Driving Wheel, The Janiva Magness Band, The Stilettos, and The Blue Dynamos.

After a short stint with Janiva Magness’ band in Los Angeles in 1992, Scotty moved to South Dakota to be close to his kids. While in South Dakota, Scotty fronted “Little Scotty and the Big Tones”. An award winning traditional blues band that played clubs and festivals throughout the Dakotas, Iowa, Nebraska, and Minnesota. During this time Scotty also honed his solo acoustic act, playing festivals, concert halls and coffee houses. His solo blues CD, “The First Thing Smokin”, was released in 1996 and got rave reviews in Blues Review, Blues Access and NYCD Blue magazines.

Since returning to Arizona in 1998, Scotty has worked with Phoenix area bands, taught private guitar lessons and continued to perform solo. Since March 2006, Scotty has been performing and recording with the Midnite Blues Band, a band he has admired since he first saw the band perform in 1980. In addition to gigs with the Midnite Blues, he plays with his band The Insinceros, ��plays solo acoustic shows, and teachs guitar.