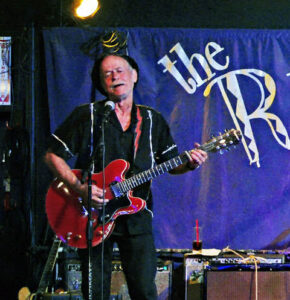 Tim’s first steady gig was as guitar player with ABHOF inductee Chico Chism.   During his tenure with Chico, they opened for Buddy Guy and Omar and the Howlers.  After leaving Chico, he met ABHOF inductees Ted Kowall and Rich Olson and together they formed the Crossfire Blues Band.

After that, Tim and Ted started Cold Shot. They opened for Kenny Neal and other big name artists. Cold Shot went on to become Cold Shott and the Hurricane Horns. They opened for many big Blues acts including Delbert McClinton and Guitar Shorty. Tim also played with Luther Jackson for a while in Loose Cannons.

Tim started the Top Cats Blues Band. The Top Cats have been very active in the Phoenix Blues scene, playing the Casinos. Blues clubs, as well as opening twice for Brian Setzer and his orchestra at the Celebrity Theatre and for the opening of the Chicago Cubs Stadium in the Valley. They also played for the season opening for the Cubs the year they brought the Championship trophy.