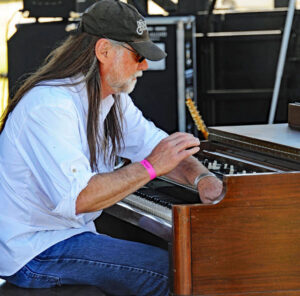 Tom McMillian is a Hammond B3 player. It has been that way since he began playing keyboards in southern California in the early 1970’s.

Tom moved to northern Arizona in the mid 80’s where he immediately began playing in dance cover bands. In the late 90’s he teamed up with Arizona Blues Hall of Famer (ABHOF) Hank Tomlin to play on his CD, ARMS Around My Rose. Tom played with the Hank Tomlin Band (with ABHOF players Bob Blasi and Jimmy Mac) for the next three years. Tom then moved on to be The Tommy Dukes (ABHOF) keyboard player for close to a decade. During that time he produced Northern Arizona’s first Blues and Boogie Fest (Orpheum theater, Flagstaff) featuring three ABHOF players, Hans Olson, Hank Tomlin and Cold Shot featuring Small Paul. During the last few years Tom joined forces with R.D. Olson (Vocalist-Harp, ABHOF) to compete in the 2016 Blues Challenge in Memphis.

Today, Tom is the newly elected Board Member to the ABHOF representing the northern region of the state. He can also be found where he began. That is, playing out in northern Arizona with his Hammond B3 and spinning Leslie’s. Asked why he doesn’t play on a synth or a Hammond clone board, he will tell you. “There is nothing like playing the blues on the real deal.”